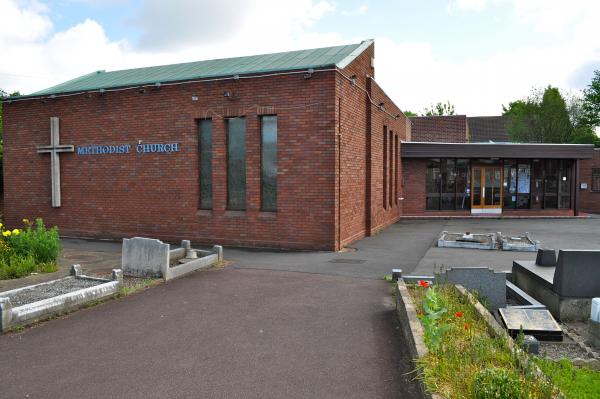 Methodism in Brierley Hill developed in the 1790s a long time after John Wesley started his work. First, it began with people who had heard him speak in local towns, who met in cottages in the Level Street area and in Brockmoor. We know that Methodism was well established by1811/12 when people met regularly for worship a​nd fellowship.

In 1823 Noah Pearson offered the Methodists an upper room over his Malthouse at the Five Ways in the High Street and people from all over the area came. They called it ‘Noah’s Ark’. At that time there was much controversy in Methodism over the rights of lay people which resulted in the members breaking away and joining other Methodist bodies in which these rights were recognised. One such group was the Primitive Methodists who opened their chapel in Bent Street in 1821. Also about this time a chapel was established by another breakaway group in Brockmoor. Noah’s Ark was never satisfactory and was getting crowded, so a site was purchased in Bank Street in March 1829, a chapel built and opened on October 11th 1829. At the time it was on the main route through Brierley Hill, the High Street being a bit of a backwater, Eventually Brockmoor joined the same group as Bank Street in 1838.

During the ensuing years many were attracted to the Primitive Methodist view and chapels were established in Hill Street, Moor Lane and Silver End. The Bank Street chapel suffered a great deal from subsidence caused by coalmining and after many years of continual remediation until in 1881 they actually bought the mineral rights under the chapel to stop further trouble. From 1841 until 1884 the Church was also a day school.

In the 1960s it was realized that there was an overprovision of Methodist Churches in the town and so Bank Street, Brockmoor, Hill Street and Moor Lane closed and their members united in a new church on the Bank Street sit called ‘Brierley Hill Methodist Church’ on 1st September 1965. Old Bank Street was demolished and a new church built, opening on 30th January 1971, at which point Silver Street also united. While the church was being built we shared premises with the Congregational church who eventually also united. For over 200 years Methodists have witnessed to the Glory of God. May they do so for many years to come.
[Richard L Brook & Kevin G Gripton]

A Pioneer missionary is buried in our churchyard.
His name is John Thomas, who was born at Clent in 1796. 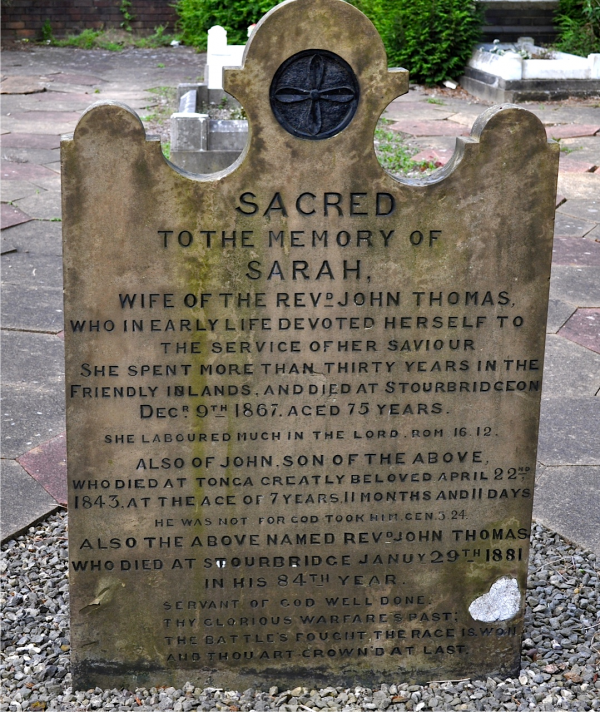 His father was blacksmith at Hagley. He sang in Clent church choir but was asked to give occasional help to the Methodists who had started to meet in Clent. He was converted and began to do even more work. The Rector did not like this but, with God’s help John was determined to continue. He became convinced he must offer himself as a missionary. After passing certain tests he was to go to the Friendly Isles (Tonga). He left on the Andromeda in 1825 and arrived in Tonga in 1826. Quickly learning the language and laying the foundations for introducing Christianity, practically the whole of the Tongan people, including the King ad Royal Family were converted and joined the Methodist Church. This happening was known as the Tongan Pentecost of 1834. Poor health caused John Thomas to return to England in 1850, although he returned in 1855. At the jubilee of Tongan Methodism, the people set him a love gift of £100. On his final return to England he became a supernumerary at Stourbridge finding much work to do. In early 1881 he was laid low with pleurisy and on the Thursday before his death he said, “I have seen my Tongan Friends. What a joyful meeting there will be.” He died on 29th January. His funeral service was held at the Wesleyan Chapel in Stourbridge and his remains interred along with his first wife in the burial ground at Brierley Hill.
[James H Mees and Kevin G Griptom]

Bernard Bishop is the only soldier killed in the Great War (1914-1918) commemorated anywhere on our premises. Although buried in France, he is commemorated on his parent’s grave in our churchyard.

The eldest Son of Samuel and Hagar Bishop of Albion Street, Brierley Hill, Bernard was born on 13th May 1899. He was employed as a bank clerk at Barclays Bank in Dudley, before enlisting in the Reserves on 31st January 1916. He was mobilised on 12th June 1917 with the army number 59467 and went for training at Brocton Training Camp on Cannock Chase.Bernard was posted on 8th September 1917 to the 13th Battalion of the Durham Light Infantry and saw action in Italy and France.

He lost his life on 6th October 1918 in the final battle fought by his Battalion as part of the action when the British Army breached the defences of the Hindenburg Line. He is buried in the Military Cemetery at Beaurevoir in Northern France.
[Jenny Green and Kevin G Gripton]

The ashes of a well-known local footballer are buried in our Churchyard. Ray Westwood was born on 14th April 1912, the day the Titanic sank. He signed for Brierley Hill Alliance in 1927. He was later sotted by a local Scout for Bolton Wanderers and made his debut for the Lancashire club during the 1930/31 season. At 22 years of age he received an international call up and went on to play for England 15 times, appearing with the likes of Stanley Mathews. Ray was in the army for 5 seasons during WW2, being part of the escape from Dunkirk. After the war he returned to form a remarkable goal scoring partnership with Nat Lofthouse. Ray possessed great speed and ball control and averaged 28 goals per season. He retired from the game in 1948 and returned to Brierley Hill where he ran a newsagent’s shop and, later, a driving school. He died in 1982. His widow, Fanny, once said to the author, “Just imagine what my life would have been like if Ray had been playing today!”
[Kevin G Gripton cty. Doreen G Gripton]